5 Types of Relationships You’ll Have Dating in LA

When I first moved to Los Angeles, I often thought to myself “dang, everything I’ve ever heard about this city is actually true.” The good stuff and most definitely the bad stuff, too. Between the expense, the expanse, the traffic, and the never ending hustle. People on the outside want to believe that everyone in LA is a struggling actor, a starving artist, or an actually starving model and we’re all too self involved to function. But for the most part, we’re a bunch of Non-Specials constantly looking for a higher paying job and as “normal” a life as LA could provide.

I was mentally prepared for how much I would pay in rent and that scooting from Point A to Point B at an average of 5mph was my new reality. I knew that parking spaces and seasonal changes would soon be a distant memory. What no one takes the time to warn you about with Los Angeles is what will soon consume your life upon moving there…dating. Any longtime LA resident can vouch for me here, the people you will encounter and attempt to love in this city are their own rare breed of weird. As an LA resident you have either been in, watched a roommate suffer through, or can anticipate to have any of the following Los Angeles dating scenarios…or all of them if you’ve picked up some bad karma along your way.

The East Side v. West Side Struggle

In any other city a 10 mile distance between your home and your potential girlfriend’s place would be no big deal. In Los Angeles, you’re begging for disaster. To the East-Sider, anything West of Fairfax might as well be No Man’s Land. The West-Sider treats Santa Monica as if it has a protective magical orb encircling it, leaving it
is out of the question entirely. Suffering the 10 every other day for someone you just met? YEAH RIGHT. You might have deeper pockets than half of LA but it sends literal shivers down my spin calculating the cost of an Uber from Venice to Hollywood during surge pricing. You have to either expatriate from your beloved hood or settle on seeing each other bi-weekly at brunch in Downtown. Or just quit while you’re ahead.

Making an Attempt With a DJ…

Everyone, and I mean absolutely everyone in Los Angeles without exaggeration, either is a DJ, lives with a DJ, was once a DJ, has a DJ best friend, or will eventually date a DJ. If you would never willingly enter a seedy Downtown warehouse with inexplicably wet floors passed 3AM to wander through strobe lights and pounding bass on your own accord, don’t do it for some dude. You will never see your DJ earlier than 4PM and he’s likely to disappear for days on end…to Vegas or something, whatever the excuse. The lesser DJ is constantly on the hustle for bigger gigs and will bypass spending time with you for a 30 minutes set at some no name bar in The Valley. The bigger your DJ, the higher the probability that you’re one of a heard of options he’s keeping around for decoration at his club appearances. If you don’t already own 76 beaded bracelets and neon fishnets, the DJ’s lifestyle is probably not one for you. Regular musicians are difficult enough, proceed with caution.

Despite being in a city of nearly 4 million people, there is something in the air that inevitably drives every one of us to seek out our soulmates through the most vapid and inorganic medium of all…the internet! Everyone who is single (and some who aren’t single) in Los Angeles is guilty of swiping for love in all the wrong places. Tinder desperation will very rarely lead to actual romance and can hardly be considered dating, but what it does get you are some very hilarious stories. A former roommate once had a meditation prayer read to her in bed by a pretty well known front-man of an early 2000’s pop-rock band thanks to Tinder. My best friend was told she needed to immediately convert to Pentecostalism and embrace speaking in tongues by a guy on their first (and only) date. My experiences were never as funny, mostly splitting bar tabs halfway and awkward side hugs at the end of the night. Still, I recommend you give it a whirl…just for the hell of it.

Only Here For the Parking Spot

In a city of very few easy to come by luxuries, the temptation to keep a less than stellar connection going between you and someone with really good Wifi and air conditioning will be stronger than you expect. You won’t be introducing them to your friends and probably won’t put forth the effort to contour yourself to Kardashian levels when you actually bother to meet them in public, but you’ll do whatever is necessary to take advantage of their extra parking spot late at night. As long as you come with a little something to offer, this can be a symbiotic and delightful agreement between two Angelenos. You scratch my back and I’ll scratch yours kind of thing. Bonus points if you can find someone with no roommates that you have to avoid and an HBO Now account.

Dealing with the Almost Famous

Everyone in Los Angeles “knows” someone, but mostly they’re trying to be someone. This is not a stereotype about LA, but rather the very actual reality of the city. Eventually you’re going to hook up with the Director/Actor/Producer/Manager/YouTuber/Vine Comedian who spends more time thinking about their Instagram following than they will ever think about you. They’re exhausting, but usually good looking and that tinge of creative crazy means they’re pretty fun too. They come with the obvious perks like invites to weird premieres and events with free food, but keep your distance and make a point to not catch feelings. Never make the mistake of thinking that someone on their way up is going to take you with them.

Los Angeles is a jungle to phrase it lightly. If you have your wits about you and a thicker skin than most, dating in this city can be a lot of fun. Keep your focus on your own goals and happiness at all times and let the different personalities of this place filter in and out of your experience, you’ll be happier with the stories you come away with if you make a point not to take any of it too seriously. Go forth and conquer, babes. 10 Margarita Recipes That Will Have You Thirsty For SummerCocktails & Recipes, Drinks 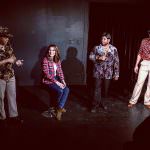 8 Lesser-Known Chicago Comedy/Improv Theaters to LOL at This WeekendChicago, Cities