Where To Find The Best Comedy Shows in Los Angeles Los Angeles is the birthplace of the Groundling and home to more comedy centers than you can count. That means that every day of the week offers fun and inexpensive options for laughter-filled nights out. Here’s some comedy shows that shouldn’t be missed.

Every Sunday evening at 7:30pm for $16, the Sunday Company showcases top talent and sketch comedy at the Groundlings, LA’s oldest comedy company and school. The show features two hours of original, brand-new sketch material that the Sunday Company has spent the week writing and rehearsing.

The Ding Dong Show at the Comedy Store

The Ding Dong Show is Comedy Store’s longest running and free standup comedy show (and one of LA’s weirdest shows). Hosted by Don Barris, the Howard Stern-like show is a discussion of their weird and crazy views of the cast members.

On the fourth Tuesday of every month (with some exceptions), the Quick and Funny group produces hour-long, witty and original musical takes on pop culture topics. A $5 ticket gets you access to hilarious musical takes on Fox News (Fox Newiscal/One Night Stand on June 20) and the movie Center Stage (on June 28 and July 26).

The Meltdown w/ Jonah & Kumail is a weekly show hosted by standup comedians Jonah Ray and Kumail Nanjiani. Each show features comedian guests who do 10-minute sets and banter with the hosts in the back room of the Meltdown Comics. Previous guests have included Chelsea Peretti, Paul Sheer, and Natasha Leggero, which is pretty mind-blowing since tickets are only $8.

There’s a reason why UCB has two locations in Los Angeles – there’s too much funny for one location. Every Thursday night at 11pm for $5, the original UCB Franklin location features the Last Day of School: The Txt Msg Show. The Txt Msg Show utilizes text messages obtained from audience members’ phones as inspiration material for a completely improvised half-hour show.

Comedy isn’t limited to east of the 405. Mission IMPROVable’s show, held on Friday and Saturday nights at 10pm, puts a spin on your typical improv style format. The cast members are “secret agents” who encourage the audience “co-agents” to shout out suggestions for improved interactive “missions” based on those suggestions. Tickets are only $12, parking is easy, and there’s no two drink minimum like most LA comedy clubs.

Every Saturday at 9pm, check out the Armando Show for $10, an hour-long improv comedy show consisting of improvised skits inspired by an improvised monologue that is in turn inspired by an audience suggestion. The improv inception back and forth is not to be missed. 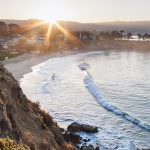 What To Expect At Our Favorite Los Angeles BeachesCities, Los Angeles