How to Make the Best Kentucky Mule

Whiskey and ginger has long been a thing. But it wasn’t until the Moscow Mule became wildly popular that whiskey lovers wanted in on the copper mug action, too. Hence, the Kentucky Mule was born, with features—you guessed it—bourbon instead of vodka. It’s crisp crowd-pleaser that’s a little bit spicy, and a little bit sweet.

How to make a Kentucky Mule

Fill a copper mug with ice and pour the bourbon and lime juice over the ice. Top off with ginger beer. Garnish with the lime wedge and you’re off to the races.

What’s the difference between a Moscow Mule and a Kentucky Mule?

Is a Kentucky Mule a good cocktail?

Bourbon, ginger beer, lime juice—what’s not to love? Sure, it’s simple, but it’s feisty and delicious, which are some of the best qualities a cocktail can have.

Is a Kentucky Mule different than an Irish Mule?

They are indeed different, though they both have whiskey in them. As you might guess, a Kentucky Mule features bourbon and an Irish Mule features Irish whiskey. They’re both delicious.

What’s the best bourbon for a Kentucky Mule?

Considering the name of the drink is a “Kentucky Mule,” it only makes sense, in our opinion, to use a Kentucky bourbon like Bulleit. The kick of Bulleit matches the punchy sweetness of the ginger beer perfectly.

Can I get a Kentucky Mule delivered near me?

You bet! Or rather, we can deliver you all the ingredients for a Kentucky Mule and you can whip one up ASAP. 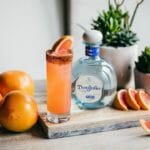 How to Make An Excellent Bourbon & CokeCocktails + Recipes