How to Make a Perfect Vodka Tonic

Merriam Webster defines “tonic” as “a medicinal substance taken to give a feeling of vigor or well-being.” We’re absolutely not trying to say vodka tonic is medicine, but we can definitely vouch for that “well-being” part. This classic cocktail is simple and utterly refreshing—especially when it’s made with Ketel One Vodka. Best of all, it’s nearly foolproof when you’re making it at home.

How to make a vodka tonic:

Fill a glass with ice and add your Ketel One Vodka. Top it off with your tonic water and give it a little stir. Garnish with a lime wedge and there you have it: well-being in a glass.

How is a vodka tonic different from a vodka soda?

Vodka tonics utilize tonic water, which has dissolved quinine in it (fun fact: quinine comes from the bark of the cinchona tree and was once used to treat malaria!). This gives it a bitter yet slightly sweet flavor. Vodka soda calls for club soda, which is just carbonated water.

Well, “healthy” is something of a relative term. Vodka doesn’t have any sugar, so that’s a plus. But alcohol is alcohol and should be enjoyed per the recommendations of health professionals.

What is the best vodka for vodka tonic?

We’re partial to Ketel One Vodka, because it’s so crisp, clean, and refreshing—everything a vodka tonic should be.

Can I get vodka tonic delivery near me?

Yes. Yes you can. Just add Ketel One, some tonic water, and some limes to your Saucey cart and we’ll be there ASAP. 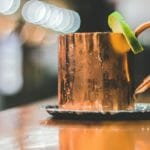 How to Make the Ultimate Moscow MuleCocktails & Recipes 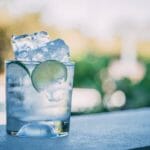 How to Make a Flawless Gin & TonicCocktails & Recipes