3 Past Presidents Who Had Careers In the Alcohol Industry

It’s no secret that our last president was a big fan of beer. Google ‘Obama drinking beer’ and you’ll find more than a handful of images of our swaggiest president pounding a pint. In fact, Obama was even the first President to brew beer at the White House. Well, technically his staff did, but he gave the order… that counts, right?

Their White House Ale was even made using honey from the beehives kept in the First Lady’s garden. Talk about a patriotic beer. Since his retirement from the presidency, there haven’t been any talks of starting a brewery, but I’d totally buy an Obama Brew.

Obama may have been our last president to be so open about his love of alcohol, but he definitely wasn’t the first. As if being the leader of the Free World wasn’t enough, turns out our past presidents had some hidden talents involving alcohol as well. Lincoln could craft a cocktail, Washington was a whiskey wizard, and Jefferson brewed the best beer on the block. Don’t believe me? Sit back, relax, and grab a drink, because I’m about to drop some serious presidential drinking knowledge on you.

During the Douglas-Lincoln Debates, Lincoln got put on blast for operating a ‘grocery’, which at the time was a well known euphemism for a tavern or bar. Lincoln basically said, ‘not that it would be a big deal if I did work as a bartender, but I totally didn’t’.

In those early years, not many towns had bars or saloons, so the General Stores/Groceries were often licensed to sell alcohol. They didn’t just sell pints and fifths like today’s corner market or bodega might. Instead, they were more like an upscale grocery store where you can wander around sipping Champagne while you shop. Maybe not quite so fancy, but the idea is the same. Not only did their “grocery” sell practical and necessary household items, they also served as the local watering hole, and one of the few places in town to get a good stiff drink.

In March, 1833, Berry and Lincoln General Store, became Berry and Lincoln Tavern with the issuance of their liquor license, which allowed them to sell individual drinks at the store. The license cost them $7, and gave them permission to sell half-pints of whatever they pleased. However, the prices they charged were regulated by the license they received, so they didn’t get much say there. They sold half pints of Brandy for less than 25 cents, half pints of Holland gin for 18.75 cents, or domestic gin for 12.5 cents. Wine was just 25 cents a glass, rum was 18.75 cents, and whiskey was 12.5 cents.

Even then, they knew you shouldn’t drink on an empty stomach. Berry and Lincoln also offered carry-out meals for stage passengers for 37 cents, as well as room and board for weary patrons and their horses. Sounds like a solid business plan, but unfortunately for Lincoln, Berry wasn’t a very reliable business partner.

After just a few years, Lincoln sold his share of the business to Berry and became a mailman instead, while he studied law and pursued politics. But, Lincoln wasn’t able to leave the business behind for long. His old partner Berry enjoyed drinking more than doing good business, and when he passed away a few years later, the business was in shambles. Leaving an unfortunate Lincoln with a mound of debt he wasn’t able to pay off until he entered Congress in 1847.

Our first president was looking for a nice quiet retirement. But then, somebody said whiskey.

Following his presidency, Washington was hesitant to build a distillery for producing rye and corn whiskey, but his newly hired Scottish property manager was quite convincing. Washington oversaw the process closely, and when the distillery was complete it was the largest in America. The distillery housed five copper stills, boilers, and tubs for days. They made wooden troughs to channel water from the creek on Washington’s property. They had everything they needed to create a whiskey empire.

Unfortunately, Washington passed away not long after the distillery really got off the ground, but it grew to become one of his most successful ventures. Besides America, I guess.

They produced a variety of whiskeys, brandies, and even vinegar at the distillery. They found that the grain/mash waste from the whiskey made excellent meals for livestock. In fact, they produced some of the fattest little piggies that side of the Mississippi.

Their most popular whiskey was made using 60% rye, 35% corn, and 5% malted barley. They also produced smaller quantities of quadruple distilled rye whiskey, which were considerably more expensive. They even made cinnamon whiskey for a period. After Washington’s passing, the business was inherited by a nephew. Unfortunately, a fire destroyed the distillery a little over a decade later, and the nephew took the insurance money and bailed on the business. Total bummer. Imagine how cool it would be to drink the same whiskey as our very first president. I guess we’ll have to settle for an American Rye and use our imagination.

Unlike Washington, Thomas Jefferson didn’t need any convincing to spend his retirement working on alcohol-related endeavors.

Before Jefferson dreamt of running the country, his wife Martha used to make him 15-gallon batches of small beer every two weeks. Clearly, Jefferson liked a good brew. He considered beer and cider to be ‘table drinks’ and one of life’s necessities. So, when it came time to finally craft his own ale, he didn’t take it lightly.

Jefferson studied the science behind brewing beer, and was successful from the start. He made his first brew using locally grown malts and hops from his neighbors. Once he perfected the process, he carefully trained his farmhands to recreate it.

Once he was up and running, Jefferson began growing his own hops, malting his own grains, and started churning out three, sixty-gallon casks of ale every Fall. They would keg the beer and let it to rest for at least two weeks after brewing, but Jefferson preferred his beer from a bottle. So, the farm-hands were responsible for bottling and carefully corking the beer.

After tasting Jefferson’s tantalizing brew at social gatherings at the farm, word of his talents quickly traveled. At the time, major distribution for beer wasn’t really a thing, so homebrewing was pretty popular. Neighbors, friends, and colleagues begged Jefferson for his recipe. In fact, Jefferson told James Madison that he was doubtful of anyone’s ability to recreate his brew from a recipe. Jefferson suggested Madison send someone to be trained in the process instead.

If only Jefferson had been more enterprising and sold his ale… we could all be enjoying crisp, cold, classic beer from our third Commander (and brewmaster) in Chief.

We can’t promise you Washington’s whiskey or Jefferson’s beer, and our delivery drivers aren’t interested in dressing like Abe Lincoln (we checked); but, we can bring your drinks directly to your door in as little as 30 minutes. Put away those Lincolns, as always, delivery is on us!

First time getting Saucey? Use promo code READINGROOM for $10 off your first order.

Quotes About Drinking From Presidents and Founding FathersHistory 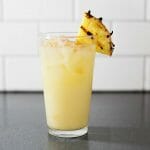