The History of the Hand Grenade Drink

For experienced drinkers, few cocktails can compete with the legend that is the Hand Grenade.  This drink contains several different liquors, as well as several secret ingredients. While we can’t tell you exactly what’s in this drink, we can tell you about its history.

This mixed drink is known for its sweet melon flavors and strong acidity. Despite its heavily sugary palate, this drink is very potent. If you’re looking for a drink that has some kick, this is the one for you.

Considering how strong this mixture is, the Hand Grenade is remarkably easy to drink. In fact, you may find yourself sipping it a little too fast because it tastes so good.

The Hand Grenade originates from New Orleans, a city renowned for its booze. From the multitude of bars to liquor stores to the annual week of Mardi Gras, New Orleans reigns king in drinking culture.

The Hand Grenade is a favorite among locals and tourists alike and can be found at dozens of different establishments throughout the city. If you’re visiting New Orleans for the first time, it is practically mandatory to order a Hand Grenade.

This drink has only existed for a few decades, but its history is storied. Don’t mistake this cocktail for one of those cheap, trendy drinks that faze out over time. This drink is tied tightly to the customs and traditions of New Orleans.

Few travel destinations are as drinker-friendly as New Orleans. This summer, why not book a trip to The Big Easy and get yourself a Hand Grenade?

The Hand Grenade is rooted in New Orleans

New Orleans is an absolute paradise for drinkers. This city is home to some of the most iconic bars in the country, like the Sazerac Bar. The streets are littered with different bars, lounges, and drink-serving restaurants.

New Orleans is also the birthplace of several classic cocktails such as the Hurricane, the Roffignac, the Vieux Carré, and many others.

If you’re visiting New Orleans, there’s a good chance that you’re going to find yourself on Bourbon Street at some point during your trip. This is the most popular area in the city by far, housing thirteen blocks of strip clubs, bars, and food spots that’ll leave your mouth watering.

As you take a stroll down this famous street, you’ll almost certainly notice signs outside of bars advertising the Hand Grenade. This is the only place in the world where you can find an authentic rendition of this cocktail, though some establishments offer weak imitations of it.

No drink gets the job done quite like the Hand Grenade. After enjoying a glass, you’ll be dancing and socializing all night on Bourbon Street.

Bourbon Street is a lively, vibrant area. Simply put, when you’re looking for a good time, you head here. It’s like a 24/7 block party, featuring some of the most flavorful drinks in the country.

What makes this street so iconic, though, is the people that inhabit it. Filled with liqueur and indulgent desires, locals and tourists flock to Bourbon Street daily to party and celebrate with each other.

The debut of the Hand Grenade

This drink was originally invented by The Tropical Isle bar in 1984. It debuted at the New Orleans World Exposition, where it quickly became a crowd favorite.

That year, the fair carried the theme, “The World of Rivers — Fresh Waters as a Source of Life.” The theme didn’t fare well with the public, as they saw a record-low attendance for a world fair.

Most critics considered the event a failure, but for Tropical Isle owners Earl Bernhardt and Pam Fortner, it was one of the biggest nights of their lives.

The creation of the Hand Grenade, like some other drinks, was motivated by hardship. At the time, Tropical Isle was losing money from their business. For six months, they had been serving Daiquiris, which were hard to sell.

Bernhardt and Fortner realized a change in the business model was needed when they began seeing their competitors wooing customers away from them by selling Hurricanes.

Tropical Isle didn’t just jump on the bandwagon. One Saturday night, as Bernhardt and Fortner walked down Bourbon Street and observed a frenzy of Hurricane drinkers, they decided they were going to create an entirely new drink, one that could compete with the Hurricane and boost their sales exponentially.

Bernhardt and Fortner wanted to make the drink green as an homage to the military. The result was the Hand Grenade: a dark green concoction blended with 13 different ingredients.

The Hand Grenade blows up

As you can imagine, the response was tremendous. Immediately, Tropical Isle’s fortune turned around. The drink became wildly popular among college students.

After the cocktail was released, Bernhardt hired Al Miller, a rock musician, to play live music at his bar. He was among the first to introduce this style of music to the French Quarter, which helped set his business apart from the others.

Eventually, the demand for this drink became too high to keep making them by hand. Tropical Isle partnered with National Fruit Flavor Co. to speed up the creation process utilizing walk-in coolers to remedy this issue.

As the success of the drink catapulted, the business continued to expand. Today, there are six Tropical Isle establishments scattered on Bourbon Street. At all six locations, this cocktail is made and served.

Within just a few decades, the Hand Grenade has become one of the main stars of Bourbon Street. According to Bernhardt, “It’s the most popular drink in the city.” Though fans of the Hurricane and Sazerac may disagree, you can’t deny the impact of this amazing cocktail.

One thing is for certain: as advertised by Tropical Isle, the Hand Grenade is definitely New Orleans’ most powerful drink.

So how did Bernhardt craft the recipe? Well, we wish we knew.

As mentioned previously, the recipe is a secret. We know that the drink is made from a concentrated mix, combined with water and different distilled liqueurs. Bartenders mix these ingredients in 65-gallon containers, creating enormous amounts of the drink at a time.

Thanks to this efficient production process, Tropical Isle can sell nearly a million Hand Grenades every year. The company even sells bottled versions of the cocktail online for those who might not be able to make their way to Bourbon Street.

Legal specifications for the Hand Grenade

Even with the expansion of this drink, Tropical Isle is still the only brand that makes it, and it seems that it isn’t going to change any time soon.

The bar holds four active trademarks for this drink, registered with the U.S. Patent and Trademark Office. The first two trademarks were filed in 1993 and protect the brand’s non-alcoholic Hand Grenade mix and prepared alcoholic cocktails.

The brand is also ready to come after any imitators. In fact, they offer a $250 cash reward to anyone who provides information that leads to the identification and termination of illegal use of their trademarks.

The company has even hired a full-time trademark firm to find illegal businesses selling Hand Grenades. According to Bernhardt, he’s never lost a trademark case in court.

If you ever have the luxury of visiting the beautiful city of New Orleans, you know that you have to make a stop on Bourbon Street for a Hand Grenade.

This drink can balance sweetness with boldness flawlessly. With its long ingredient list and versatile blend of flavors, this drink is one of the most unique cocktails in the world.

Be careful with it, though. If you know what’s good for you, it’s wise to just stick to one Hand Grenade for the night. Tropical Isle isn’t kidding when they say it’s the most powerful drink in the city.

The business has even warned its customers that three Hand Grenades “will result in complete loss of your inhibitions.” Things can go from fun to crazy really fast on Bourbon Street.

Nonetheless, this drink is a blessing to the community. It really makes Bourbon Street feel that much more special. You won’t find a cocktail like this one anywhere else in the world.

If you’re looking for a fast, reliable alcohol delivery service, check out Saucey. We carry thousands of different bottles from a plethora of different brands. 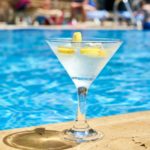 What Is A Dry Martini?Cocktails, Cocktails & Recipes, History