Whiskey sours are a delicious, classic cocktail. They’re smooth and smoky, with a punch of sweetness and tang. However, if you order them all the time, sometimes you want a little something different.

In this article, we’ll teach you all about the history of the whiskey sour and give you some fun, amazing recipes to liven up your next cocktail party.

History of the whiskey sour

The whiskey sour is a classic cocktail. The term cocktail is often thrown around and used to refer to any mixed drink. However, the technical definition of the cocktail was first created in 1806 as “a stimulating liquor composed of any kind of sugar, water, and bitters.” Cocktails were just for fun in the early days, but bartenders like Jerry Thomas helped turn them into art.

Jerry Thomas, nicknamed “The Professor,” is known as the godfather of flair bartending. He traveled all around the United States and Europe, inventing cocktails and collecting recipes. He wrote one of the first comprehensive cocktail recipe books, entitled The Bartender’s Guide (or How to Mix Drinks), which was basically a comprehensive encyclopedia of drink recipes.

It was in Thomas’s book that the first written recipe for the whiskey sour appeared in 1862. However, the drink was being made for over a century before this. In fact, the earliest versions of the whiskey sour were actually drunk out of necessity, not for pleasure. In days when traveling took weeks and refrigeration was non-existent, liquors like rum and whiskey were sometimes the safest thing to drink. Sailors took them aboard ships for long journeys and often drank them with citrus juice mixed in to prevent scurvy. Thus, an early version of the whiskey sour was born.

Sailors brought their favorite beverage to shore, and eventually, the whiskey sour was refined into what we know it today. Jerry Thomas’ original recipe was written as follows:

Fill the glass full of shaved ice, shake up and strain into a claret glass. Ornament with berries.

A few things have changed since this recipe was written. Now, water is usually used in place of soda, as soda tends to lose its effervescence when shaken. Additionally, many whiskeys sour you’ll see today are served with egg white foam on top. This adds a smooth, creamy element to the cocktail, and it adds a visually interesting element. The prospect of adding raw egg to a cocktail makes some people nervous due to the risk of salmonella. However, if a bar keeps its eggs cold and is careful not to touch the white to the outside of the shell when it’s cracked, the amount of egg white in a cocktail really poses no threat.

The whiskey sour has faded in and out of fashion throughout cocktail history. It’s a simple, classic cocktail and is sometimes overlooked in favor of flashy cocktails with more ingredients. Cultural and historical events such as Prohibition and world wars affected access to ingredients, and thus, the whiskey sour often fell by the wayside. Nowadays, it’s back in fashion, and almost every bar serves it in some form or another.

The recipes on this list range from classic to innovative, so you’re sure to find something that reflects your current mood and includes the ingredients you have on hand.

This is the version of a whiskey sour you’ll see most often. It’s simple and made from the basic cocktail building blocks of liquor, citrus juice, and sweetener. It’s incredibly delicious with or without the egg white.

If using an egg, separate the white into your cocktail shaker and dry shake (without ice) vigorously until it is white and foamy. Then, add your ice, as well as your whiskey, lemon juice, and simple syrup. Shake until well-chilled, and strain into a rocks glass filled with fresh ice. Garnish with your fruit.

This whiskey sour replaces the simple syrup with maple syrup for a delicious, warm maple flavor. It also adds a dash of cinnamon to compliment the maple. Combined with the silky-smooth Bulleit bourbon, with its maple, oak, and nutmeg notes, it makes an amazing spiced autumn cocktail.

Fill a cocktail shaker with ice. Add your whiskey, lemon juice, maple syrup, and cinnamon. Shake until well-chilled. Strain into a glass filled with fresh ice, and enjoy.

If you like fruity cocktails, look no further than this blackberry whiskey sour. It’s sweet, tart, and smooth. It’s made with orange liqueur for an extra punch of citrus. It’s perfect for spring and summer, but it’s so delicious you’ll want to have it all year round.

Place your whiskey and blackberries in a mixing glass and muddle thoroughly until the berries break down, about a minute or two. Add your lemon juice, simple syrup, and orange liqueur into the mixing glass and stir. Pour the cocktail through a fine-mesh strainer into a cocktail glass over ice.

This apple whiskey sour takes the traditional cocktail and gives it a fun fall twist. There’s nothing like crisp apple cider on a chilly fall day, and when you put it in a whiskey sour, it takes it to the next level. Using bourbon gives the drink a sweet, smoky flavor, while a dash of orange bitters adds a punch of flavor.

Combine all your ingredients in a cocktail shaker with ice. Shake until well chilled. Strain into a cocktail glass with fresh ice, and enjoy.

This cocktail has the perfect combination of tartness and sweetness and is an absolute pleasure to sip. It calls for ginger syrup instead of simple syrup, which is made by dissolving ½ cup sugar into ⅜ cup of water over medium-high heat, then adding ½ cup of peeled, sliced fresh ginger. Reduce the heat, let it simmer for 10 minutes, then remove it from the heat, allow it to cool, and strain out the ginger solids.

Add your rye, apricot liqueur, lemon juice, and ginger syrup to a cocktail shaker with ice. Shake until well-chilled, then strain into a cocktail glass filled with fresh ice. Garnish with a cherry and enjoy.

If you’ve ever had trouble choosing between wine and a cocktail, now you don’t have to. The Bordeaux sour is the best of both worlds: full-bodied and aromatic from the wine, while tart and smooth like a whiskey sour.

In a cocktail shaker, muddle one cherry and maple syrup until well-combined. Add your bourbon, Bordeaux, maple syrup, lemon juice, and bitters, and shake well with ice until thoroughly chilled. Strain into a cocktail glass with fresh ice, garnish with your second cherry, and serve.

The whiskey sour has been around for generations. While it was originally served to hydrate sailors on long journeys and help fend off scurvy, it has been refined over time into a luxurious, smooth, tart cocktail enjoyed worldwide. Whether you prefer the classic version or one with a twist, you’re sure to find something you enjoy from the list above.

For all your whiskey delivery needs, you can trust Saucey. We offer speedy delivery of wine, beer, and spirits and zero-order minimums. Whether you need a bottle of wine to wind down, a vital cocktail ingredient to make the drink you’ve been craving, or you run out of beer at your barbeque, Saucey has your back. Browse our extensive library of whiskeys and treat yourself to a bottle today. 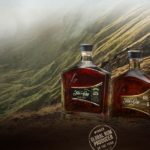 The History of the Hand Grenade DrinkDrinks, History