Spiced vs Dark Rum: Understanding These and Other Types of Rum

Spiced vs Dark Rum: Understanding These and Other Types of Rum

Rum: you either love it or hate it. It’s one of those liquors you really enjoy drinking or one that brings up memories of having one too many Pina Coladas from that vacation years ago. While alcohols like vodka have been around since the 8th or 9th century and tequila has been around for thousands of years, rum is relatively new.

Its origins can be traced to the Caribbean in the 1650s. It is a distilled liquor created from sugarcane, more specifically molasses. If it is not possible to use sugarcane itself, you can use sugarcane juice instead. Rum was actually the first liquor to be mass-produced in the United States, with New England being one of the biggest producers and international distributors of the beverage.

Compared to other types of alcohol, rum maintains its raw-material flavor. This is why rum is much sweeter than other alcohols; you can taste the sugar in it. Depending on the type of rum, it may have more of a molasses flavor or more of a sugarcane flavor. Dark and heavy rums, for example, have a stronger molasses taste.

When you’re considering the different types of rum, there are two that you’re bound to come across: spiced rum and dark rum. These two spirits can look pretty similar, sporting a dark, deep color, so what’s the difference?

We get it: all the different types of rum out there can get a little bit confusing. That said, when it comes to the difference between spiced rum and dark rum, the distinction is actually pretty similar! It all comes down to flavoring.

Spiced rum has flavor added to it. It is infused with lots of spices, such as cinnamon, cloves, and cardamom. There are many brands that get creative and play around with the spices, adding in things such as pepper and anise. Those spices are what lead to the darker color of this variety.

Spiced rum commonly makes an appearance in rum punch, although you can also sub it in for a lighter rum to add a bit of flavor to a cocktail.

Dark rum, which is sometimes referred to as black rum, can be aged for many years in order to achieve its dark color, which can range from amber to a dark brown (almost black) shade. Dark rum is made in the same way as white and silver rums, but it does not go through the filtration process, so it keeps its color and more intense flavor. True black rum contains extra molasses to darken the color and sweeten it.

You’ll find dark rum as a classic ingredient in a Dark ‘N Stormy, as well as a component in some of your favorite poolside drinks like a Mai Thai.

That said, be on the lookout when it comes to dark rum: some brands aren’t truly aged, and instead, just have caramel coloring added to give them those dark tones. This kind of rum can still taste great, but just be on the lookout so you know what you’re buying.

What Other Types of Rum Are There?

There are five main types of rum. Each has a distinctive flavor profile and, in the case of gold and dark rum, a distinct color. Besides spiced, gold, and dark rum (which come in shades of amber and brown), rum is clear-colored.

Some types of rum are specific to different parts of the world, which also influences its flavorings. For example, dry and light-bodied rums are typical in Puerto Rico and The Virgin Islands, whereas the dark and full-bodied rums are most common in Jamaica and Barbados.

Here are the other types of rum and some information about each type:

What Are Some Popular Brands of Spiced Rum?

From tropical vacation drinks to classy cocktails, rum is delicious and versatile alcohol. Its sweet flavor truly makes it stand out from other types of spirits. Below, we have compiled a list of rum brands that have proven time and time again to be some of the most popular.

While you might think of either pirates or tropical drinks on vacation when you think of rum, there is a lot more to it than that. It has really gained popularity in recent years and has become known for being a versatile, flavorful, and sweet alcohol.

Similar to tequila, the main difference between types of rums is the aging process, and that’s a big distinction between dark rum and spiced rum. On top of that, spiced rum is, well, spiced, making for an even more complex and flavorful drink.

When you are ready to get the party started, or you are interested in experimenting with rum cocktails of your own, Saucey has got you covered. Choose from hundreds of rums and have them delivered right to your doorstep. 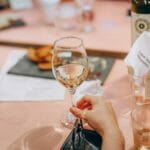 Calories in Wine vs Vodka: Factors to ConsiderDrinks, Vodka, Wine Potato Vodka vs Grain Vodka: How These and Other Varieties DifferDrinks, Vodka