The Truth About the Worm in Your Tequila

What is the worm in your tequila?

The worm isn’t technically a worm. It is a larva of a moth that live on the agave plant (which is used to produce mezcal). We’ve all heard the theory of a higher proof tequila when a worm has been deposited in a bottle. Others believe that consuming the worm may cause hallucinations or increase your state of drunkenness… but is it true? Not really. 😱

Contrary to the popular belief, tequila doesn’t actually contain the worm. The worm was reserved for mezcal, which is known as tequila’s big brother. So what’s the difference? Tequilas consist of at least 51%, whereas mezcal must be 100% agave (read more on the difference between tequila vs. mezcal).

It all started in the 1950s, when a local mezcal maker discovered a moth larvae in a batch of mezcal and thought its presence improved its taste. He placed a worm in each bottle as a marketing strategy and over time, other manufacturers followed suit due to its popularity.

Today, tequila does not contain a worm in the bottle (in fact, the Mexican Standards authority prohibits it). But if you do find a bottle, they’re usually in lower-ended mezcal. So, should one eat the worm?

If you’re up for an adventure…

Who isn’t? According to a colleague, it tastes like chicken. His first advice? Don’t down a shot with the worm. Sip the mezcal for its agave flavors and aromas. Second advice? Chew the worm and enjoy the taste on your palette. Would you do it? 🐛

For all the over-achievers out there, you can always find a bottle of scorpion mezcal (yes, you read that correctly). Don’t worry, the stinger and poison is removed, plus, it is FDA approved. Bottom line is, mezcal makes us happy. I can surely attest to that, especially since it can be delivered to me in 30 minutes by Saucey.

They work great neat and on the rocks, or enjoyed in a margarita or tequila sunrise. Check out our menu for mixers and ingredients!

Get $10 off your first Saucey order with code READINGROOM. Cheers 😉 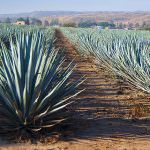 The Real Difference Between Tequila and MezcalDrinks, Spirits