What To Know About Pouring and Serving Beer

How to pour and serve beer

Sometimes we don’t drink beer straight from the bottle. I know, shocking.

According to the Brewers Association, 2015 saw an all time high for number of beer breweries in these beautiful United States – totaling 4,144 and counting! California, Texas, New York, Colorado and a handful more boast over 100 independently owned breweries within their states alone. When former President Jimmy Carter sign HR 1337 in 1979, legalizing the practice of home brewing and writing off one of the few remaining Prohibition Era laws, the beginning of the craft beer scene in America was underway. Legalization of brew pubs happened in 1982 which allowed for all of these crafty homemade libations to finally be marketable for the thirsty masses.

Over the years we’ve seen a rise in lesser known styles of beer on the American market. Craft breweries are taking a crack at Belgian style ales alongside their hoppy IPAs and aren’t shying away from Altbiers, Saisons, and even a Gose or two. Beer, while only categorized by two types, has countless varieties of styles much like wine. There are as many “varietals” of beer, if not more, as wine and the complexities within do not get perhaps as much attention as they are due. Beer is no longer the blue collar workin’ man’s post shift beverage, in other words…beer today is classy as hell.

Part of the reason that the complexity of beer is still a little lost in translation is because, unlike wine, the way you pour certain styles of beer is extremely important to the taste. Sure, a lot of red wines benefit from decanting, but as long as they’re allowed to “breathe” within the bottle it’s pretty much the same thing. Beer needs a little more flair to really draw out the flavors within the brew. If you’re looking to delve deeper in your knowledge of beer, wanting to amp up your prowess as a connoisseur, or looking for a great beer gift for a budding hops hobbyist, the first step in the process is acquiring the correct glassware and learning how to properly pour beer according to its specific style. How To Pour: The tall tapered design of the Pilsner glass lends to its ability to build and maintain a fluffy head, something that is extremely important to the taste of a beer. Most of your sense of taste relies on your sense of smell, head on a beer is bringing the subtle flavors to the pronounced forefront and allows the beer to aerate. Pouring a beer correctly means that you will always have a layer of head along the top, if you’ve ever felt like a bartender was trying to rip you off by not pouring to the absolute top of a glass – please dispel that notion here, it was always for your own good.

Pilsner glasses are best for the lighter styles and you can definitely use a cold glass, but it isn’t necessary. For the lighter styles, you’ll want to begin pouring at a 45 degree angle, slow from the bottle to avoid “glugging” the beer out and causing the carbonation to go wild. Don’t be a afraid to put some distance between the bottle and the glass, the more air in the pouring stage the better. When the beer reaches halfway up the glass, slowly start to tilt the glass up and continue to pour slowly and straight down. How To Pour: Tulips glasses, along with chalices (below), are probably the most important styles of glassware for the proper pouring of beer. Drinking a dense, hoppy, and strong alcoholic IPA from a tulip versus a pint glass will basically yield two different beers. Tulips provide a wide surface area for proper aeration and the synched “tulip” shape allows for a large and lingering head. If you know that you’re preparing to pour a strong and complex ale, the tulip glass is absolutely the way to go. Set the glass onto a counter top, you won’t need to hold it for this pour. Hold the bottle firmly over the opening and pour straight down into the glass slowly, you want the head to begin forming immediately. When the bottle has about a third of the beer left in it, stop and set it aside. Let the beer in the glass settle for a minute, and swirl the remainder of the beer in the bottle a few times before pouring the rest in, again doing it straight down.

Strong ales will almost always have a bit of sediment at the bottom of the bottles that needs to be woken up, so to speak, and poured into the formed head. Most of the flavor resides in this sediment, pouring it into the head works with the carbonation and the shape of the glass to evenly distribute it throughout the pour. How To Pour: Unless you have a plethora of vacant cabinet spaces, you really don’t need to keep Chalices and Tulips stocked at the same time. Despite the very different shapes, they pretty much accomplish the same thing. The difference lies in that the Tulip satisfies many more styles, while the Chalice is really best for the dark ale family – and that drinking from a Chalice is FREAKING COOL. Yeah, this glass is mostly for eye candy and pretending you’re Tyrion Lannister. Don’t get it twisted though, they really lend a helping hand to the flavors of a complex dark ale with all that surface area exposed for aeration. Pour straight down, let settle, swirl, pour the rest, and ponder your House’s military strategy…or something. How To Pour: You’re probably confused that pints are so far down on this list given that nearly every beer you’ve been served in your life was likely in a pint glass. Well, pints do the works well enough for all styles…but they’re definitely not enhancing the experience. You have to pour into something, right? For your home collection, pints are best reserved for pouring stouts and nitros. Stouts will have less carbonation than other styles, and nitro stouts and nitro ales will have no carbonation at all. In order to form a good head on a stout or nitro, you will need a more violent pour to activate carbonation. Pour slowly but straight down into the pint, especially important for your nitro beers. If you’re unfamiliar with the nitro style, they’re typically stouts using Nitrogen over traditional CO2 which results in a super creamy dreamy mouthfeel and warm deep flavor. Highly recommended.

These four glassware styles are a good start to your beer drinking collection and they only get more varied and complex from there, but these basics should get you going in the right direction. If you discover that you really enjoy a particular style, chances are there is an even more specific glass for it and pouring technique. So it’s probably time to get to drinking and find out! 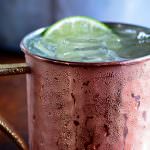 How To Make A Moscow MuleCocktails & Recipes