The Best Orange Liqueur To Use For Each Cocktail

In the past few decades, flavored liqueurs have earned a bit of a negative reputation. It is no surprise that many older drinkers in the community aren’t fans of bright, glitzy drinks. At this point, a lot of people have written off flavored liqueurs as amateur drinks.

This belief has been spurred on by brands releasing poorly made, cheap products masked by weak flavoring agents. As a result, there is a huge misconception among drinkers that liqueurs are only flavored when they lack complexity on their own.

Though this can be true in certain situations, many liqueurs have proven that quality doesn’t have to be sacrificed for flavor. In fact, as we’ve seen from some products, additional flavoring can greatly enhance a drink.

Take, for instance, Patrón’s XO Café Incendio Chile Chocolate Liqueur. This tequila is aged for nearly a decade and infused with elegant Criollo chocolate and Mexican arbol chile notes. For its price point, there are few liqueurs as well crafted as this one, and yet it’s flavored.

The rise of orange liqueurs

There’s nothing wrong with adding some extra oomph to your drink, and this notion is especially true when it comes to orange liqueurs.

Orange is one of the most complimentary fruit flavors to alcohol due to its citrusy taste and high acidity.

Dutch settlers are credited with producing the first variation of orange liqueur in the 19th century.

Since then, orange liqueurs have grown in popularity as a cocktail ingredient. Though some prefer their mixed drinks to capture the original flavors of the spirits used, colorful, fruity cocktails are loved by many.

To learn more about which orange liqueurs to use for your next cocktail, keep reading below with Saucey.

Curaçao is one of the most popular styles of orange liqueur. Historically, it’s produced on the island of Curaçao, located in the Southern Caribbean, just off the coast of Venezuela.

The history of orange Curaçao

The drink is made from a pot-stilled brandy and flavored with dried Curaçao orange peels. These oranges are considered a product of the island. However, they were first introduced to Curaçao by Spanish settlers. They were originally known as Valencia oranges.

However, the orange proved to be difficult to grow in Curaçao’s dry climate. As they matured, the oranges would become bitter and inedible.

It was by random coincidence that the peels began to be valued as a flavoring agent. One day, in a field where the plants had grown wild, someone discovered the skin of a Curaçao orange. They left it to dry in the sun and discovered that it produced an amazing fragrance.

It is unknown who this person was that first dried the peel of a Curaçao orange. However, they effectively changed the landscape of alcohol on the island.

By 1896, distillers all throughout Curaçao were using the peels of Curaçao oranges to add flavor and aroma to their liquors. To this day, this historical method of flavoring is used, even outside of the island.

Yet Curaçao is not a protected appellation. As you may know, some products like cognac and champagne are protected by law. They must be made in their region of origin.

Unfortunately, this isn’t the case for Curaçao. Producers are allowed to make this drink anywhere and all it Curaçao. This has made it more difficult to find traditional Curaçaos, but some brands do exist.

Notably, a company named Curaçao of Curaçao produces all their bottles on the island. The brand is run by the Senior family of Curaçao.

Triple sec on the rise

Triple sec is another popular style of orange liqueur. It is the generic term used for a sweet, clear, orange-flavored liqueur.

Unlike Curaçao, it originates from France. When it was first introduced, triple sec contained less sugar than Curaçao, which inspired “sec,” which means “dry” in French. Nobody quite knows where the term “triple” came from.

Some people claim that the name comes from triple sec being triple-distilled, but this isn’t true. There are tons of triple sec brands that are not distilled three times.

Others claim that this liqueur is three times as dry as Curaçao or other liqueurs. This also isn’t true, although the drink is relatively dry in comparison.

The two most famous orange liqueur brands are probably Grand Marnier and Cointreau. These companies are considered the OG’s of the orange liqueur market and have been going at it for years.

The Grand Marnier brand was started in 1870, when Louis-Alexandre Marnier-Lapostolle, the grand-nephew of Jean-Baptiste, created a liqueur that blended cognac, sugar syrup, and an alcohol extraction of Bigarade oranges from the Caribbean.

Their standard orange liqueur is considered a Curaçao. The taste of Grand Marnier is a bit darker than other flavored liqueurs, with stark notes of vanilla and oak. This drink contains an ABV of 40%.

On the other hand, Cointreau is considered a triple sec and is made from a mix of sweet and bitter orange peels and sugar beet alcohol. It has a crisp, smooth orange taste, washed down with solid acidity. It has a 40% ABV.

Though Cointreau is accepted by most as a triple sec, the brand has begun to separate itself from that market. When the brand first came out, they labeled their orange liqueur as Cointreau Triple Sec. However, they’ve removed the triple sec labeling since.

Now that you know everything there is to know about orange liqueur, it’s time to start making some cocktails. When the summer rolls around, there’s no better way to relax than with a refreshing mixed drink.

The first cocktail we’re going to be talking about is the orange crush. This cocktail is as simple as it gets. For fans of Screwdrivers and Mimosas, the Orange Crush provides an excellent sweetness and airiness.

To make this cocktail, you’ll need one freshly juiced, navel orange, two ounces of vodka, an ounce of orange liqueur, and three to four ounces of a lemon-lime soda like Sprite or Sierra Mist. For an added touch of flavor, garnish the drink with orange wedges and fresh mint.

We recommend using Grand Marnier for your orange liqueur, but any Curaçao-styled spirit will do fine. With how sugary this drink is, you’re going to want to add a noticeable punch.

This drink is so flavorful and fruity that you can hardly taste the vodka. This drink is dangerously easy to drink.

For those who prefer sour cocktails, you’re going to love this Sidecar recipe. It is typically made with cognac, orange liqueur, and lemon juice. This drink displays an incredible balance between sweet and tart, with just the perfect amount of kick from the cognac. It can best be compared to the older cocktail, the Brandy Crusta.

There are a million adjectives for this drink: warm, crisp, dry, rich, full. Without a doubt, few mixed drinks are as complete as the sidecar.

The best type of orange liqueur to use for a sidecar is a triple sec like Cointreau. Simply mix all your ingredients together in an ice-filled shaker. Then, strain into a glass with ice.

Garnish with a lemon or orange peel. To enhance the flavor and aroma of the drink, you can squeeze a little bit of lemon in.

Orange liqueur doesn’t need to be limited to Blue Curaçao (a dyed version of Orange Curaçao) and cheap, sugary concoctions. Nowadays, there are a ton of quality bottles on the market.

No matter what your budget is, you’ll be able to find a solid bottle of orange liqueur. As this drink grows in prevalence, expect to see more variations of this drink to come.

Whether you’re looking for a liqueur to sip straight or an ingredient for your next cocktail, the orange liqueur is a wise choice. Who doesn’t like a little bit of sweetness in their drink?

If you’re not a fan of oranges, there are also many different flavored liqueurs out there. How about some pineapple-flavored triple sec? Or some mango-flavored Patrón? What to Mix With BaileysCocktails, Liquor 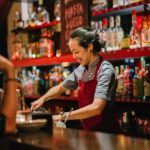 What’s the Difference Between a Mixologist and a Bartender?History, Technology