Absinthe Effects: The Truth About This Misunderstood Spirit

Absinthe is probably the most misunderstood spirit in the entire industry. This drink has a reputation for being banned in many countries and is rumored to be a hallucinogen.

This storied spirit has even been blamed for Vincent van Gogh cutting his ear off. However, this myth has been debunked.

Van Gogh had a well-documented history of mental illness, and it was quite common for him to experience hallucinogenic episodes where he’d lose consciousness. This infamous event actually occurred when van Gogh got into an argument with fellow artist Paul Gauguin.

A ton of rumors surround this spirit, though much of them have no evidence behind them. With all of these crazy, baseless claims behind us, we can begin to analyze absinthe for the spirit it really is.

Absinthe: What Is It?

Traditional absinthe is produced from a blend of anise, fennel, and wormwood. There are numerous recipes for the drink, most of which include additional botanicals for flavoring and coloring.

This mixture is drenched in a neutral spirit, then distilled. Afterward, it’s diluted down until it reaches its desired strength. To further intensify the flavor and color, the absinthe is usually infused a second time before it’s bottled.

Most of the time, it’s bottled between 110 and 144 proof. When you taste absinthe, you’ll notice how potent this alcohol really is. After a sip, it begins to make a bit more sense why people would think this drink causes hallucinations.

But don’t be fooled! The effects of this spirit are essentially no different than any other bottle. It just contains a lot of alcohol.

All in all, absinthe is grossly underappreciated. With a little bit of background knowledge, you can make great use out of this classic drink.

How Absinthe Is Enjoyed

One reason that the negative stigma surrounding absinthe exists is that a lot of people have no clue how to drink it.

Like a few other spirits, absinthe wasn’t traditionally drunk for pleasure. The earliest records of wormwood consumption date back to 3100 BC in ancient Egypt, when it was used to prevent malaria.

The drink was used medicinally all the way through 1844, when the bitter spirit was given to French soldiers fighting in Algeria. It was believed that the absinthe helped prevent malaria, as well as fever and the spread of water-dwelling bacteria.

Sometimes, absinthe would be mixed with wine and enjoyed as a cocktail. But it would really start to be appreciated for its recreational value when bartenders started serving it with a fountain of cool water dripped over a flaming sugar cube. To this day, this is how absinthe is served.

It is extremely ironic that the same spirit used as a health supplement for thousands of years would later be mislabeled as a drug that causes hallucinations.

Absinthe was originally distilled in Switzerland in the late 1700s as a tonic. By the mid-1800s, the spirit had grown in popularity significantly.

People liked it because it was a stronger alternative to wine. It was also more affordable.

French poet and essayist Charles Baudelaire is one of the many famous creatives during this period who struggled with his addiction to absinthe. He frequently mixed the drink with opium and laudanum, which was a consistent topic in his writing.

While absinthe spiked in demand, the wine industry was being ravaged by a worldwide grape shortage. This was when winemakers began to be pitted up against absinthe producers. French winemakers were the biggest opponents of the absinthe industry.

The skepticism about this drink isn’t completely misplaced, though. The rumors surrounding absinthe were escalated by a huge crime story in the 20th century.

In late August of 1905, in a humble Swedish village named Commugny, a man brutally murdered his pregnant wife and two children. According to him, “the absinthe made him do it.”

This horrendous act would be dubbed as “The Absinthe Murders,” which, as you can imagine, didn’t help the marketing of the drink at all. There had been other incidences of crazed behavior following the drinking of absinthe, but this one took the cake.

A worldwide push was made toward banning the spirit, led by winemakers and activists of the Temperance Movement. Despite the fact that the man that murdered his wife and children was a raging alcoholic, absinthe was made the scapegoat of the event.

Absinthe Was Legalized in 2007

Eventually, all of the media attention surrounding absinthe led to its demise. The sale of absinthe was banned in America in 1912, as well as in several European countries.

The basis for this ban was that absinthe contained thujone, a chemical component of wormwood that can be toxic in high doses.

Thujone is responsible for the signature, minty-bitter taste of absinthe, as well as its menthol-like scent.

It should be noted that though absinthe does traditionally contain thujone, it contains such a small amount of the compound that you can barely feel its effects. In fact, you’d much more likely die of alcohol poisoning before you could consume enough thujone to harm yourself.

In no way is it possible that this trace amount of absinthe could cause hallucinations. Even back then, when higher amounts of thujone would be used for absinthe, the drink has never contained enough of the compound to be psychedelic.

It took nearly a century, but absinthe was eventually legalized in October of 2007. Under new guidelines from the U.S. Alcohol and Tobacco Tax and Trade Bureau (TTB), the Distillery Trail declared that absinthe was safe to drink, so long as it contained less than one part per million (ppm) of thujone.

Now that it has been formally disproved that absinthe is an inherently hallucinogenic drink, many brands have returned to their original formula from the early 1800s.

The Reputation of Absinthe

The drink still carries a bit of negative stigma with it today, but it is gradually being broken down. As more drinkers become educated about the truth of this drink, expect to see it more often in bars and liquor stores.

Wine lobbyists and supporters of prohibition spent years demonizing this spirit. They even created a new term called “absinthism” to refer to a severe form of alcoholism.

Traditionally, wine has been viewed by the masses as the healthier option for those who like to drink. On the other hand, absinthe was looked at as a wild drink for those who wanted to literally lose their mind.

The lies about absinthe became so insane that people started to claim that the spirit caused epilepsy, hallucinations, and episodes of insanity. These pervasive beliefs were spurred on by studies performed by Dr. Valentin Magnan, a physician who worked at an asylum in Paris.

After several years though, it became clear that Magnan’s work was very misleading. His experiments involved exposing animals to pure wormwood essence, which is far more potent than thujone.

Thujone actually only contains small amounts of wormwood. Yet, this study was accepted by many for years as proof that absinthe was a dangerous drink.

The Wild Truth of Absinthe

You may have seen absinthe be lit on fire in what’s known as the Bohemian style. This method of serving originated in Czech bars as a means of masking the natural flavor. It was commonly used when drinking unauthentic absinthe. This act has been demonstrated in mainstream media as well, most notably in the movie “From Hell” starring Johnny Depp.

Now that you know the true history of this drink, perhaps you can begin to appreciate its rich past and its standard of quality. For those that enjoy their strong liquors, absinthe is the spirit for you.

Before you go out to buy a bottle of absinthe, make sure you know what you’re getting into. This isn’t a crazy party drug that’ll make you trip out. It isn’t a harmful chemical that’ll cause seizures. It is a liquor. And just like any other liquor, it should be drunk responsibly.

For a wide selection of absinthes, check out Saucey. We’re the number one alcohol delivery service in the United States, delivering to nearly every major city in the country. How To Charge A Juul Without A ChargerCigarettes, Online, Tech 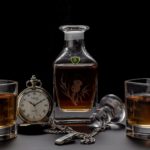