What is the Best Beer For Beer Batter?

Many people think that beer batter is reserved only for fish n’ chips, but this classic cooking ingredient has a lot more uses than you might think.

There really is no bad food to batter in beer, from meats to vegetables to everything in between. Practically everything tastes better when it’s crunchy and fried, especially when soaked in some good ‘ol beer. A little bit of beer batter can really make a dish. However, not all beers are meant to be used as a batter. The style of beer you choose is extremely important to the resulting taste of your dish.

Different beers work for different foods. For instance, an IPA works better for foods that have a bit of bitterness. On the other hand, a Belgian tripel matches up with sweeter dishes nicely. One combination that works beautifully is a can of Bud Light and some freshly caught cod. The light, airiness of the Bud Light helps cook the batter quickly and allows the cod to stay moist. Bud Light batter with cod creates an amazing blend of crunchiness and juiciness.

Today, we’re going to be teaching you exactly how to select a beer for your batter. We’re here to turn your soggy, tasteless foods into masterfully crisp delights.

The perfect beer for your batter will contain ample carbonation to crisp the fried dough of the batter. You also want a little bit of added flavor to your batter. Look for a beer that contains a fairly complex palate. Keep reading below with Saucey to find out what the best beer for beer batter is. 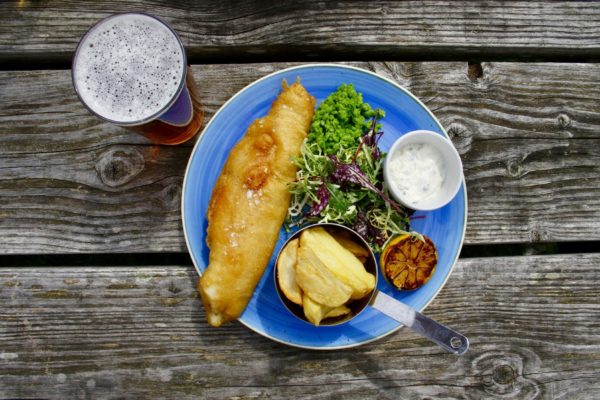 First, let’s talk about why this combination works so well. I mean, who would’ve ever thought that an alcoholic beverage can make fried foods taste so good?

Well, beer makes for a great base for batter because it contains three essential ingredients: carbon dioxide, foaming agents, and alcohol. Each of these ingredients contributes to the chemistry of the batter. As mentioned before, certain beers can help bring out the crunchiness of batter.

If you’ve ever had some really good fish ‘n chips, the fish was probably really juicy, and the outer crust was probably very crisp. To achieve this effect, beer is the main liquid in making the batter instead of water or milk.

Unlike most solids like salt and sugar, gases like carbon dioxide dissolve very efficiently at low temperatures. When you include beer in your batter mix, you’re almost always ending up with a crispier texture.

Once the batter makes contact with hot oil, the solubility of the carbon dioxide drops, causing the bubbles to froth up and expand the batter. This wouldn’t be possible if the bubbles burst as soon as they appeared, which occurs in a glass of champagne. However, beer contains foaming agents that act as proteins and protect these bubbles. Some of these ingredients are added to produce a creamy, sustaining head.

Additionally, the alcohol in the beer plays a huge role in regulating the internal temperature of the food. Foams also are great thermal insulators. When you drop a piece of beer-battered food in a deep fryer, most of the heat enters the batter rather than the actual food inside so that the interior doesn’t get dried out.

As mentioned before, certain beers work better for certain foods.

If you’re planning on making some fish ‘n chips, remember that fish like cod, skate, and haddock are pretty bland in taste. Therefore, you don’t want to choose a beer that contains flavors that are too strong. Go for a light, airy beer with a fairly complex flavor profile. London Pride, Newcastle Brown Ale, and Hobgoblin are all awesome choices.

Making beer-battered onion rings? Go with a stronger beer with a darker complexion. The ideal beer for this dish is Guinness. That dark, amber color gives the onion rings a mouthwatering aesthetic and the perfect flavor.

If you’re not a fan of Guinness, other stout beers work well with your batter. The Wild Onion Drago is a Russian imperial stout beer that is aged in bourbon barrels. It contains 10% ABV.

As implied by the name, this beer has a palate characterized by a sweet, oniony taste. It is ideal to use this beer to make onion rings and french fries.  Considering how high its alcohol content is, it is best to use this beer for plain foods that can benefit from some extra texture and flavor.

Typically, IPAs are not the best beers for batter because they tend to be bitter and very thin. They also contain floral hop flavors, which are essentially eradicated when cooked. All that’s left behind is the malty taste of the beer.

As with all IPAs, Goose Island IPA will cause your batter to have a hinge of bitterness to it. For that reason, it’s best to use this beer for potatoes, chicken, and pickles. 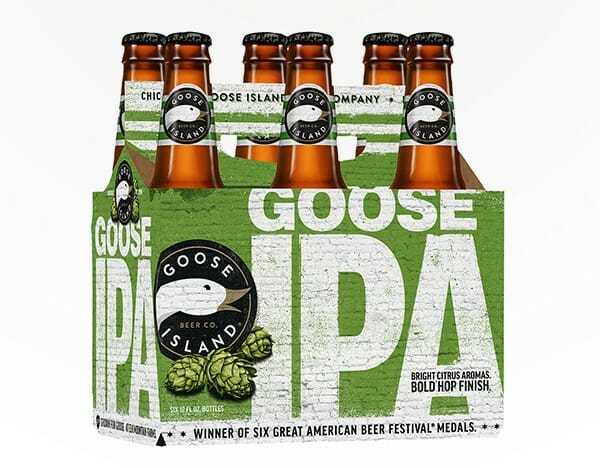 Now, we know what you’re thinking. Pabst Blue Ribbon isn’t the most elegant beer on the market. However, cheap, mass-produced beers actually work surprisingly well for beer batter. Not only is it very accessible, but cheap lager makes for a great, mild batter.

If you’re looking to make a batter that just tastes like salt and pepper, go for a cheap, watery beer like Pabst Blue Ribbon. The fried batter will contain all of the airiness of the carbonation but none of the strong flavors of traditional beer.

When you want the flavors of the food to shine through, Pabst Blue Ribbon is the beer for you.

Newcastle is an English brown ale known for its warm, caramel notes and sharp, malty aroma. At only 4.7% ABV, it is a fairly weak beer, making it a safe option for most foods.

The English have used Newcastle for their beer-battered fish ‘n chips for years. For a trusted beer with centuries of history behind it, go for a Newcastle. This beer is best used as a batter for vegetables like pickles and corn and desserts like Twinkies.

Traditionally, sour beers aren’t the best for batters because they lack carbonation. However, in the case of Almanac, this beer packs a punch of tropical flavors with sufficient acidity. A little bit of tartness can really help develop a batter. Almanac produces one of the few beers that is sour and contains moderate carbonation. It is also very widespread and affordable.

Use this beer for dishes like chicken, white fish, and potatoes. Any dish that utilizes a lot of herbs and spices will benefit from this beer.

There are endless combinations of beers and foods you can pair to create a battered dish. Don’t feel limited to just fish n’ chips. You can make beer-battered shrimp, chicken, clams, mushrooms, and much more.

The use of alcohol in cooking has existed for hundreds of years. For years, people have used wines in plates like pasta and poultry.

When making beer-battered foods, the name of the game is balance. Find a beer that complements the individual flavors of the food you’re cooking. And make sure your beer won’t overwhelm the natural flavors of your dish.

You don’t have to be on the boardwalk or the Southern United States to enjoy some beer-battered foods. Now, you can make some delicious beer-battered dishes from the comfort of your own home.

You can practically fry any food you want in beer batter. Think about what foods are best served crispy, and throw it in some batter.