Wine Coolers: What Are They And How Are They Made?

In the 1980s, wine coolers were all the rage. They’re sweet, refreshing, and a great way to stretch out a bottle of wine. However, since then, they’ve been on a roller coaster of popularity, going in and out of fashion. There’s a good chance you may not even know what a wine cooler really is. If you’re in the dark, don’t worry, we’re here to help.

Let’s define what a wine cooler is, learn a little bit about its history, and get some great wine cooler recipes that are perfectly refreshing for the summer.

What is a wine cooler?

If you have heard of a wine cooler, you may also know about the negative connotations usually associated with them. Wine coolers are often thought to be intensely sweet and made with very cheap wine. They also have a reputation for being drunk by sorority girls, as they’re very easy to drink and light on the alcohol.

In general, a wine cooler combines wine, fruit juice, sugar, and carbonated water. Wine coolers are a derivative of a wine spritzer, a chilled white wine cocktail mixed with a spritz of sparkling water. The first wine coolers were homemade and usually combined a light white wine with a lemon-lime soda.

Wine coolers were originally marketed as a soda pop beverage for adults. They usually contained pulp, artificial fruit flavors, and cheap wine. They were fairly light on alcohol, containing about 4% to 6% ABV. These cloyingly sweet beverages were popular for a while. Eventually, they faded out of popularity to make way for a new fad.

The history of wine coolers

The first wine coolers were bottled and sold commercially in 1981. The wine cooler craze reached its peak in 1987 when wine cooler sales topped a billion dollars annually, and the sweet cocktails accounted for 20% of all wine sold in the United States.

The original wine cooler was called the California Cooler and was invented by a man named Michael Crete. It was originally made as a tropical, refreshing beach drink, combining pineapple, grapefruit, and lemon-lime with white wine and club soda. Crete noticed the drink’s popularity among his friends and teamed up with friend Stuart Bewley to package and sell the cocktails.

After years of testing and development, California Cooler hit the shelves and quickly gained popularity. By 1984, they were selling 10 million cases per year. Other big booze companies wanted to capitalize on the craze, and more brands of wine coolers began being developed. The market was totally saturated with this sweet, fizzy beverage.

Wine coolers weren’t the first wine cocktail. Before the 1980s, wine was used in cocktails like sangria or spritzers. However, wine cocktails had never been so widely available, especially in convenient, single-serve bottles.

What factors contributed to the rise of the wine cooler?

There were a lot of factors that contributed to the popularity of wine coolers. They had fairly low alcohol content, usually under 6%, matching the 1980s’ rise in health and fitness consciousness. They also contained real juice, which seemed to be a healthier alternative to beer.

The wine cooler industry also benefited from the cheap wine prices of the 80s. Wine sales in the United States surged in the 70s, but in the 1980s, a strong US dollar made imported wine prices more competitive. American winemakers were left with a huge surplus and needed somewhere for their wine to go.

As the 1980s went on, sales of California Coolers grew, and so did the number of competitors they faced. Brands like Bartles & Jaymes and Seagram’s became extremely popular. Eventually, there were over 100 brands on the market, with a huge variety of flavors. However, the craze didn’t last for long.

Soon after the 1980s, the wine cooler was replaced by another fad: malt-liquor-based cocktails. The most popular was Zima, a clear, lightly carbonated alcoholic beverage with the same sweetness as a wine cooler but contained no actual wine. In 1994, Zima sold 1.3 million barrels, while sales of wine coolers fell.

The wine coolers of today

Today, wine coolers still exist but are a far cry from the sickeningly sweet wine coolers of the 1980s. There are many more red wine coolers available, such as Vendange Wine Cooler Cabernet Sauvignon. Wine coolers today usually have more herbal, botanical, or bittersweet flavors instead of just one-note sweetness.

While there aren’t a huge amount of pre-packaged wine coolers sold on the shelves of liquor stores today, you can still recreate the beverage at home. You can adjust the flavors and sweetness to your preference, and create a much more light, refreshing beverage than the syrupy sweet coolers of the 80s. 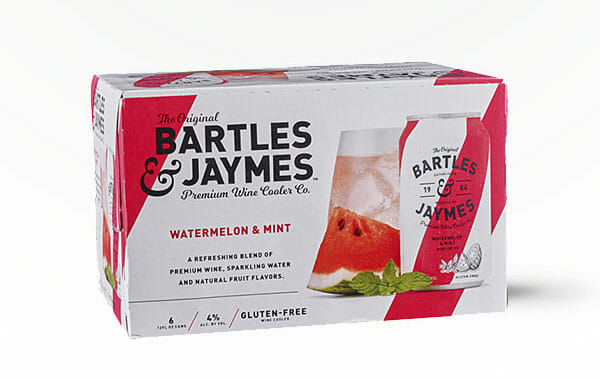 We’ve collected some of our favorite fun, refreshing wine cooler recipes below. Whether you like your coolers fruity and sweet or herbal and zesty, you’re sure to find something you love on this list.

Made with dry white wine and lightly sweetened with honey, this Peach Wine cooler recipe has a surprising twist: an extra kick of alcohol from brandy. It’s an amazingly refreshing summer drink that’s sweet, boozy, and slightly fizzy.

In a large pitcher, combine your peach slices, brandy, honey, and lemon slices. Stir in your white wine. Refrigerate for two to four hours before serving or until chilled. Just before serving, add your sparkling water. Serve in wine glasses over ice.

Another perfect summer cocktail, this Watermelon White Zinfandel is delightfully sweet and tart. Make individual servings, or whip up a pitcher for your next pool party or BBQ. This recipe calls for White Zinfandel, a sweet white wine that contrasts perfectly with the sour watermelon liqueur.

Fill your glass about halfway with ice. Pour in your White Zinfandel, Watermelon Pucker, and lemon-lime soda. Stir, and garnish with watermelon. Serve and enjoy.

These cucumber melon wine coolers are extremely cooling and refreshing while not being overly sweet. This recipe has an extra alcoholic kick from homemade cucumber-infused vodka. It takes a small amount of extra effort, but it’s definitely worth it.

Using a melon baller, scoop out melon balls from the cantaloupe and the honeydew. Place them on a tray, and put them in the freezer to chill for at least three hours. Next, pour one cup of vodka into a lidded container, along with six to eight slices of cucumber. Place in the refrigerator for at least three hours or up to three days. This will infuse your vodka with refreshing cucumber flavors.

To assemble your cocktail, place four to five frozen melon balls into a tall glass. Add two ounces of cucumber vodka, then four ounces of white wine. If you want some fizz, top with club soda. Serve chilled.

If you love rosé, you’ll absolutely adore these Raspberry Rosé Wine Coolers. They’re sweet and refreshing while still being slightly tart from the raspberry liqueur. This recipe also works wonderfully with red wine, but we love the brightness the rosé brings. If you use red wine, we recommend something off-dry to cut through the tart flavor of the liqueur.

In a tall glass filled with ice, combine your rosé, club soda, and Chambord or raspberry liqueur of choice. Stir gently, then add your raspberries to garnish. Serve chilled and enjoy.

Wine coolers have a complex, roller-coaster history. They were a huge craze when they first hit the market in the 1980s but quickly lost popularity in favor of new, trendy fads. While wine coolers may not be as popular as they once were, they’re still a sweet, fun, refreshing cocktail option, whether you purchase them bottled or make them at home.

To get your favorite adult beverages delivered today, count on Saucey. We offer speedy delivery and no order minimums of a huge variety of wine, beer, and spirits. No matter your drink of choice, we can deliver it right to your door. Treat yourself, and order from Saucey today.

2022: The Year of Mindful DrinkingDrinks, Lifestyle Rosé Wine: What Is It And How Is It Made?Wine